The most recent Sloan-funded project began work in the lab of Roberto Kolter in early July.   The name of the project is “The Effects of Surface pH on Microbial Community Composition and Susceptibility to Invasion”.  Unlike many of the previous projects funded by the microbiology of the built environment program, this is an experimental lab project as opposed to an environmental survey.   More detail below:

The hypotheses to test are remarkably simple:  (A) Does the pH of a surface influence the overall diversity of the microbial communities that become established there? (B) Are the communities that result at different pHs in any way different in their susceptibility to invasion by environmental fungi?  To test these hypotheses, we are setting up systems that allow us to methodically modify surfaces to achieve different pHs.  Under conditions of constant humidity and temperature, these surfaces will be inoculated with a complex microbial mixture of environmental origin.  The dynamics of the microbial communities that become established on these surfaces will be followed longitudinally by traditional culture-independent methods (i.e. deep sequencing of rRNA regions).  Once these results are on hand, we will begin to super-infect the colonized surfaces with fungal spores.  We will have to develop methodologies that accurately and reliably monitor fungal invasion. 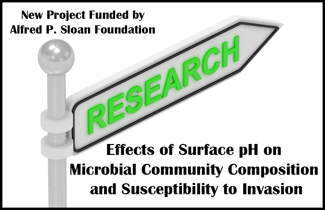 2 thoughts on “New Sloan Funded Project: “The Effects of Surface pH on Microbial Community Composition and Susceptibility to Invasion””