So earlier this week I wrote an article at Slate called “I would rather lick a toilet seat than cell phone”.  Which was a really unfortunate title since I was trying to emphasize that toilet seats are surprisingly clean and the general point of the article was about microbial scare stories.  I did not mean to imply that cell phones were horrible seething pits of disease.

Anyway, as a result, more than one person sent me some version of this story describing a new “cell phone sterilizer” which for a mere $50 will zap your phone with UV light while it charges.

Here are my issues with this:

-Yes there are bacteria on cell phones.  Does that mean there’s a health problem?  Not at all.   There are far more bacteria on your face and most people don’t stick their heads in a UV box to sleep.

-If there’s really funky stuff on your phone… it most likely came from you!  The phone isn’t a surface where things are going to be growing much so presumably the vast majority of things on there came from your face or your hands.

-The very existence of products like this feeds a culture of fear and paranoia about microbes.  The more people are scared of microbes they more they are likely to make choices that negatively impact human health (e.g. overuse of antibiotics leading to antibiotic resistance, tricoslan in everything leading to who knows what, and the lack of exposure to microbes as kids that help us having a functioning immune system later in life) 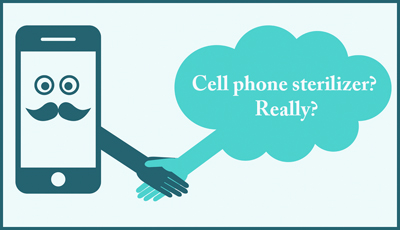