You could say that I’m milking this one study design – one in which we surveyed the airborne microbial communities and surfaces around different units of a university housing complex – and you’d be right. But for good reason: it’s a powerful study design. We have replication of residential units of a common design across buildings; we took simultaneous outdoor and indoor samples; and the samples collected aerosols in a non-invasive way over a discrete, one-month time period. 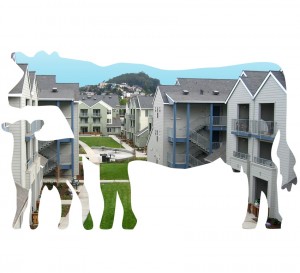 We’ve published previously on the airborne fungi and the fungi on surfaces, and now our analysis of the airborne bacteria has just been published.

We found that bacterial bioaerosols were influenced by which unit the sample came from and the room type in which it was sampled. On the other hand, our earlier study showed that fungal bioaerosols showed influence of season, unit, and to a small extent, the room in which the dust was collected. 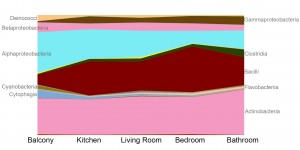 This is one of the first published studies that consider fungi and bacteria from the same samples, and it suggests that the processes the influence these two microorganisms have some commonalities but key differences. In common, both the composition of fungi and bacteria in samples decrease as the samples move farther away in space  – the distance-decay effect. In contrast, there is an abundance of human-associated bacteria indoors, and this isn’t matched with fungi. There were many human-associated bacterial that were abundant indoors, and rare or absent outdoors. Fungal taxa that were abundant indoors were also abundant outdoors.

Lest you worry, we’ve used up many of our samples, so there will be no more publications from this one study. Bacteria on households surfaces have been tackled already, anyway (here and here). As with most studies, it will be interesting to compare these results to other studies in the pipeline that further characterize the microbes – both bacteria and fungi – in homes.