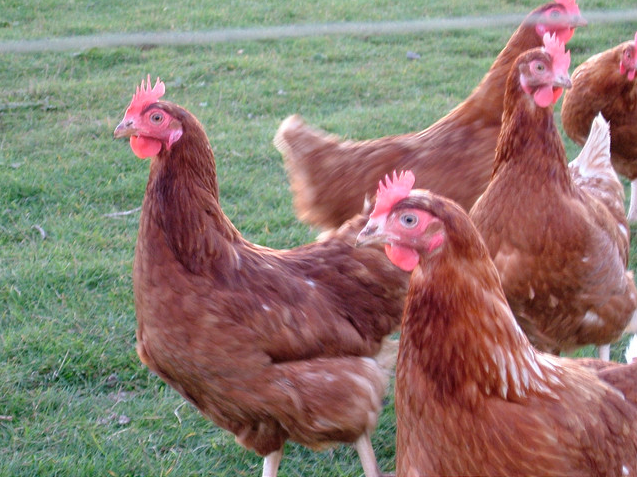 Not actually Danish chickens. (cc-by-nc river seal)
One of the most coveted chores at my high school was to feed our school’s chickens. The chickens provided eggs for the students, faculty, staff and our extensive Meals on Wheels program. I always thought it was the best chore assignment you could ask for; the hen house had clever system for collecting waste, and so the person assigned to that job almost never had to touch a shovel. Several weeks worth of food was loaded into a gravity-fed hopper and padlocked, and the water dishes automatically refilled, controlled by float switches. You didn’t even need to go inside the hen house to collect the eggs. The girl who had the job just seemed to drift in and watch the birds for a while, stack the eggs in the egg crates to be taken over to the kitchen, and the drift out again. I was not so lucky, and was assigned to the cows, which required a grueling campaign of shoveling waged by a small army of bratty teenagers every morning. So, I was always a bit annoyed with the girl assigned to the chickens.

That is, until I was brazen enough to complain to her, and she explained that her job wasn’t to watch the chickens, but to watch out for risk factors for salmonella transmission, and to make sure that idiots like me kept our grubby hands and feet away from the chain of custody.

That struck me as peculiar. My parents and grandparents always stressed that raw eggs, chicken and pork were inherently dangerous. Cookie dough with eggs was strictly off-limits for stealing. After handling chicken, my father always walked to the sink with his hands held up in front of himself, like a surgeon prepping for the operating room, and toggled the faucet with his elbow (usually while shouting, “Make way!” or imitating the beeping of a large truck in reverse). Like most Americans, I was taught that the only safe way to deal with salmonella was by cooking. Most people brought up in the United States probably had a similar culinary upbringing.

So, the business of watching the hen house for possible salmonella vectors seemed futile. I figured that chickens were just sort of naturally slathered in pathogenic salmonella, and that chicken sashimi would guarantee a trip to the hospital as surely as knocking back a shot of lighter fluid. The USDA recommendations for handling chicken don’t exactly include phrases like “slathered in pathogenic salmonella,” but it’s there if you read between the lines.

Lately, though, I’ve been learning that a great deal of what I was taught about food safety isn’t absolute, but rather a collection of adaptations to the peculiar quirks of America’s public health institutions. For example, I learned recently from Nadia Arumugam that the US and the UK have completely different approaches to keeping eggs sanitary, each going so far as to strictly prohibit practices that are absolutely required on either side of the Atlantic. In America, eggs are washed, dried and always refrigerated. In the UK, eggs must be kept clean to begin with, never washed and never refrigerated, so as to prevent the formation of condensation. Both approaches seem to work within a certain set of assumptions and behaviors.

Nevertheless, I was rather astonished to encounter a series of articles by Lynne Terry at the Oregonian describing Denmark’s successful efforts to eradicate salmonella from their poultry industry. They did this without drugs, without vaccines, and without washing the slaughtered birds with any sort of disinfecting substance. Instead, the program relies on three components. First, instead of traditional culture-based microbiological assays, they switched to an antibody screen. Second, the antibody screens are used to monitor and control the spread of salmonella so that infected flocks are not distributed along the links of the industry (the poultry industry is hierarchical; the offspring of breeding flocks are broilers, and the offspring of broiler flocks are egg-layers). Lastly, instead of pharmacological barriers, the Danish program deployed physical barriers to transmission. These physical barriers required a complete redesign of Denmark’s hen houses.

The new hen houses are separated from surroundings with a wide band of gravel, and vegetation is cleared away from the building. Food handling and storage equipment is stored in secure, sanitary locations. To enter the hen house, workers must disrobe in one area, step through a barrier, shower, step through a second barrier, and don sanitized scrubs and boots before proceeding to the area where the chickens are kept. It’s a contamination control protocol of which most hospitals should be envious.

Denmark slaughters about 100 million chickens a year and spent about $30 million compensating farmers for culled birds. So, the program added about $0.30 to the cost of a chicken. The US poultry industry processes 8.5 billion birds a year, so if the US implemented a similar program with similar costs, it would cost about $2.55 billion dollars. In 1999, the Department of Agriculture estimated that salmonella infections cost the United States about $2.329 billion 1998 dollars. Adjusted for inflation, that’s $3.307 billion 2013 dollars. In 2012, two more studies estimated the cost at $3.4 billion. So, in fairly simplistic terms, it seems that if we could reproduce the Danish program, it would net a savings of something like $757 million. It could actually be better than that if it opened up new markets for American poultry suppliers (as a vegetarian, I’m somewhat ambivalent about that prospect, I must admit).

The article in the Oregonian is a retrospective look at the results described in a 2003 paper in Emerging Infectious diseases by Henrik C. Wegener, who was at the time director of Denmark’s National Food Institute and is now provost of the Technical University of Denmark.

2 thoughts on “How Denmark eradicated salmonella in poultry”