Just a quick post here.  Some may have noticed that more of the posts here at microBEnet than say, a year ago, are not focused explicitly about “microbiology of the Built Environment” (MoBE).  They are instead sometimes focused on microbiology, history of microbiology, architecture, methods in microbial ecology, bioinformatics tools, and more.  There is a reason for this.  I have been asking for people to write about many of these areas.  And there is a reason I have been doing that.  Multiple people in the “MoBE” community have commented that it would be useful to have more general discussions here about not just the areas of overlap between “microbiology”
and the “built environment”, but also about each area individually.  And though I originally resisted this, I think this would be a wise thing to try to do.

So that is what I have done.  I have asked members of the MoBE communtiy to post at microBEnet about any of their work or interests, even if not about the overlap between microbiology and built environment studies.  I have also asked others who work on topics that are of importance to MoBE work to also post.  Yes, this will lead to a broadening of topics.  But I think (and hope) that will in the end be a good thing. 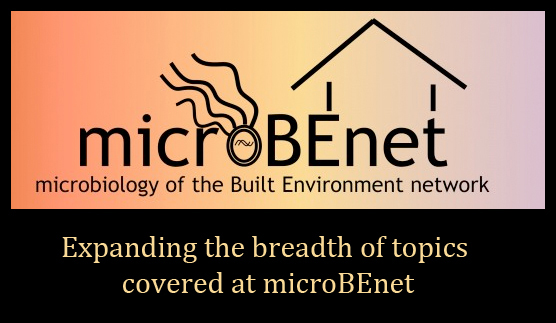