We’ve posted previously about the results of the microbial playoffs in space (microbenet post here, and project website here).  And while it’s fun to compare the growth of a microbe representing the Raiders to one representing the 49ers (Raiders won that one)… there’s a more serious question being asked here.

We wanted to know what would happen when we took normal, built environment associated microbes and grew them in microgravity on board the International Space Station.   Most previous work of this nature had focused on pathogens… which is understandable from NASA’s point of view.   But from the perspective of microbial ecology it’d be interesting to know how the “normal” and non-pathogenic members of the community might behave.

Here are the results, comparing growth on earth to growth in space for each of the 48 bugs. 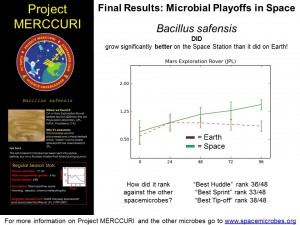 The punchline?  We have one microbe that appeared to grow much better in space (Bacillus safensis, collected from a Mars Rover before launch at JPL) and basically all the rest of them looked pretty similar between space and earth.  Good news for long-term manned spaceflight?