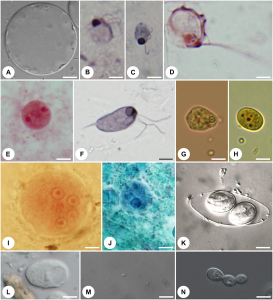 There is an interesting paper from Julius LukeÅ¡ et al. in PLOS Pathogens that is worth looking at for anyone who works on microbial diversity: PLOS Pathogens: Are Human Intestinal Eukaryotes Beneficial or Commensals?

They basically argue (reasonably I think) that the roles of microbial eukaryotes in the human gut have been excessively interpreted as parasitic and that most are probably other types of symbioses.

Although it pains me to see the term “eukaryome” to describe this community I think the authors are spot on about the need to expand our notions of what microbial eukaryotes are doing in the human gut.  They end with some future prospects worth considering: