Another paper on how sample processing (and in this case PCR primer choice) can influence microbiome studies.  And another one that is definitely worth looking at:

The abstract is below:

Results
The bacterial community profile detected in the faeces of infants is highly dependent on the methodology used. Bifidobacteria were the most abundant bacteria detected at 6 weeks in faeces from two initially breast-fed babies using fluorescent in situ hybridisation (FISH), in agreement with data from previous culture-based studies. Using the 16S rRNA gene sequencing approach, however, we found that the detection of bifidobacteria in particular crucially depended on the optimisation of the DNA extraction method, and the choice of primers used to amplify the V1—V3 regions of 16S rRNA genes prior to subsequent sequence analysis. Bifidobacteria were only well represented among amplified 16S rRNA gene sequences when mechanical disruption (bead-beating) procedures for DNA extraction were employed together with optimised “universal” PCR primers. These primers incorporate degenerate bases at positions where mismatches to bifidobacteria and other bacterial taxa occur. The use of a DNA extraction kit with no bead-beating step resulted in a complete absence of bifidobacteria in the sequence data, even when using the optimised primers.

Conclusions
This work emphasises the importance of sample processing methodology to downstream sequencing results and illustrates the value of employing multiple approaches for determining microbiota composition.

Basically they compared taxonomic profiles from samples using different sample processing and/or methods to characterize the samples.  And they saw differences including some big ones (e.g., the absence of whole phyla from some samples). 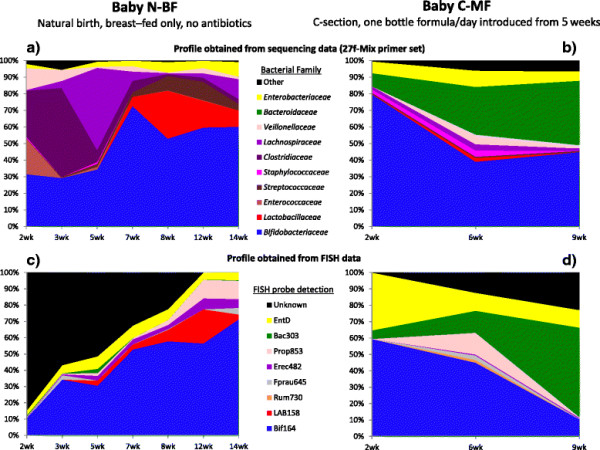