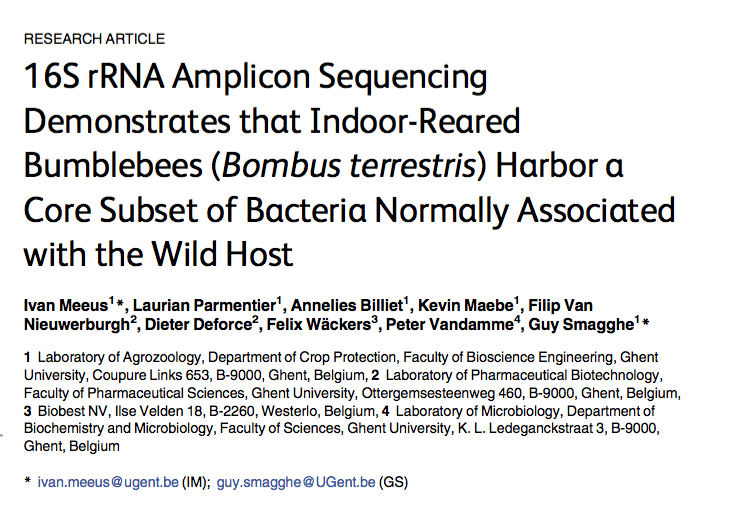 Just got done looking at this paper which I found by searching Google Scholar for “indoor bacteria”.  PLOS ONE: 16S rRNA Amplicon Sequencing Demonstrates that Indoor-Reared Bumblebees (Bombus terrestris) Harbor a Core Subset of Bacteria Normally Associated with the Wild Host

A MiSeq multiplexed 16S rRNA amplicon sequencing of the gut microbiota of wild and indoor-reared Bombus terrestris (bumblebees) confirmed the presence of a core set of bacteria, which consisted of Neisseriaceae ( Snodgrassella ), Orbaceae ( Gilliamella ), Lactobacillaceae ( Lactobacillus ), and Bifidobacteriaceae ( Bifidobacterium ). In wild B . terrestris we detected several non-core bacteria having a more variable prevalence. Although Enterobacteriaceae are unreported by non next-generation sequencing studies, it can become a dominant gut resident. Furthermore the presence of some non-core lactobacilli were associated with the relative abundance of bifidobacteria. This association was not observed in indoor-reared bumblebees lacking the non-core bacteria, but having a more standardized microbiota compared to their wild counterparts. The impact of the bottleneck microbiota of indoor-reared bumblebees when they are used in the field for pollination purpose is discussed.

Although I am interested in microbiomes of insects and bees and such, I confess I have not really scrutinized this paper in detail.  But I would like to call attention to just one aspect of this paper: the ideas that the indoor raised bees might experience a “bottleneck” in regard to microbiome colonization.  I think this is interesting because I am worried that the same thing may happen to humans during space travel (or confinement in other places with little exchange of microbes with the outside world).  I think comparative studies of animals in confined environments (e.g., research animals in labs, some animals in zoos, etc) could be of great value in understanding whether such bottlenecks happen and what their impact is on hosts.