Our latest Project MERCCURI paper came out last week and so I figured I’d do a quick post about it here since it’s a good fit for the microbiology of the built environment. 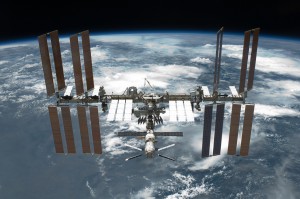 In short, we collected a number of bacterial strains from built environments on earth and sent them to the space station to see how well they grew in space.   There were two fairly distinct components to this project.   The first was that these bacteria were collected at large public events, often with the help of volunteers.   People were super excited to contribute to the project and we conducted a “Microbial Playoffs” in space where people could follow along to see whether a bacterial strain from the Oakland Raiders would grow better or worse than one from the San Francisco 49ers… etc.

The second part, and the subject of our PeerJ paper “Growth of 48 built environment bacterial isolates on board the International Space Station (ISS)” focuses not on how the strains grew with respect to each other, but how they grew with respect to control plates on earth.  All of our plates were made in duplicate and on the same days they were grown in space, we grew them in the same machine here at UC Davis.

So what happened?   Well the short version is that almost all of the strains grew similarly in space as on earth.  Which one could argue is reassuring from a manned spaceflight perspective although of course growth on small agar plugs doesn’t say much about the “natural” conditions on the ISS.   There was one strain however, Bacillus safensis JPL-MERTA-8-2, that did grow significantly better on the ISS.

Why is that you ask?   We have no idea.   So just for fun we sequenced the genome and threw it out there in the world.   Hopefully someone else will take this result and expand on it since I think most of us involved in the project have “bureaucracy fatigue” after this project.   Space is awesome… but also hard.

Here’s some English press on the article… varying degrees of accuracy here but nothing too painful.  There was a whole bunch of foreign press as well which was a first for me… I tried to use Google translate to see if we were being misquoted but gave up.