Happy Mother’s Day! Here are your new papers on microbes of the built environment. 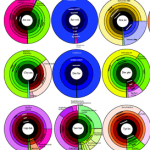 House dust mites (HDMs) and stored-product mites (SPMs) of various species inhabit human homes and stored agricultural products. These mites are carriers and hosts of microorganisms that enable their survival. The bacteriome from 13 species of SPMs and HDMs was analyzed and compared by 454 pyrosequencing of partial 16S rRNA gene amplicons. (…) Among the bacterial species identified, Staphylococcus, Bacillus, Kocuria, Brevibacterium, Corynebacterium, and Brachybacterium likely serve as food sources for the mites. The domestic acaridid mites carried high numbers of various bacteria that are potential threats to human health. These results contribute to the general understanding of the ecology of mite adaptation to human-made habitats.

Microbes and the city

Book Chapter: Urban Microbiomes and Urban Agriculture: What Are the Connections and Why Should We Care? – Gary M. King – Sowing Seeds in the City ($29.95) 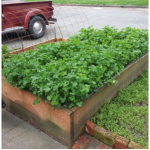 (…) Research on microbial assemblages (or microbiomes) in the built environment, particularly building interiors, has provided compelling examples of the importance of microbes, but these results provide at most an incomplete picture of microbial distribution and activity in urban systems. (…) this review defines and provides examples of the microbiome concept and the significance of microbiomes in urban systems; it also identifies large knowledge gaps and unanswered questions that must be addressed to develop a robust and predictive understanding of urban biology and ecology. 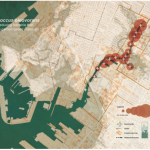 The Gowanus Canal in Brooklyn is notorious for its filth. Normally a sure fire way to contract dysentery, cancer and arsenic poisoning, the canal is now the subject of study from a diverse collaborative effort (…) Called the BK BioReactor, the undertaking employs a small autonomous watercraft that samples waters throughout the infamous canal (an U.S. Environmental Protection Agency’s (EPA) Superfund site). The researchers set out to catalog its microbial communities before the canal undergoes dredging and sub-aquatically capping as part of the Superfund cleanup later this year.

Discharge of antimicrobial residues and resistant bacteria in hospital effluents is supposed to have strong impacts on the spread of antibiotic resistant bacteria in the environment. This study aimed to characterize the effluents of the Gabriel Montpied teaching hospital, Clermont-Ferrand, France, by simultaneously measuring the concentration of ciprofloxacin and of biological indicators resistant to this molecule in biofilms formed in the hospital effluent  (…) Altogether, these data confirm the role of hospital loads as sources of pollution for wastewater and question the role of environmental biofilms communities as efficient shelters for hospital-released resistance genes. 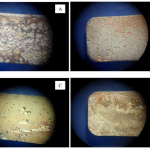 (…)  The aim of this study was to assess the long-term effectiveness of various disinfection procedures in order to reduce both culturable and nonculturable (NC) legionellae in different hospital water networks treated with heat, chlorine dioxide, monochloramine, and hydrogen peroxide. The temperature levels and biocide concentrations that proved to give reliable results were analyzed. (…) We confirm here that chemical disinfection controls Legionella colonization more effectively than hyperthermia does. Monochloramine was the most effective treatment, while hydrogen peroxide may be a promising alternative to chlorine-based disinfectants due to its ability to select for other, less virulent or nonpathogenic species.

Characterization of specific spoilage organisms (SSOs) in vacuum-packed ham by culture-plating techniques and MiSeq next-generation sequencing technologies – Agnieszka Piotrowska-Cyplik – Journal of the Science of Food and Agriculture ($6 to rent, $38 to own) 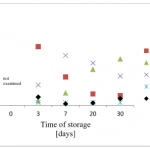 The knowledge regarding microaerophilic and anaerobic Specific Spoilage Organisms (SSOs) is crucial for an appropriate evaluation of vacuum-packed ham. The objective of this study was to characterize the SSO community in vacuum-packed ham by culture-dependent technique and MiSeq next generation sequencing (NGS) platform. (…) The bacteria identified in sliced cooked ham belonged mostly to 4 phyla: Actinobacteria, Proteobacteria, Firmicutes, and Bacteroidetes. The temperature of 4â€‰°C favoured the development of mesophilic and psychrophilic/psychrothropic flora, mainly Lactobacillaceae, Enterobacteriaceae and Micrococcaceae families (…)

Manufacturing of dark chocolate and other cocoa-based products is a complex multistage process beginning with spontaneous cocoa bean fermentation driven in the postharvest period by different microorganisms derived from the environment. Cocobiota defined as the association of microbial species involved in cocoa bean fermentation may have considerable impact on the medicinal properties of cocoa products via various primary and secondary metabolites, whose presence in dark chocolate and other cocoa-derived products has to be taken into consideration when analyzing medicinal effects of cocoa. (…)

Conventional commercial broiler production involves the rearing of more than 20,000 broilers in a single confined space for approximately 6.5 wk. (…) In the current study, a set of three naive houses were followed from inception through 11 broiler flocks and monitored for ambient climatic conditions, bacterial pathogens, and antibiotic resistance. Within the first 3 wk of the first flock cycle, 100% of litter samples were positive for Salmonella and Listeria, whereas Campylobacter was cultivation negative but PCR positive.  (…) In all likelihood, given that preflock levels were negative for pathogens and antibiotic resistance genes and 4 to 5 Log10 lower than flock levels for indicators, incoming birds most likely provided the colonizing microbiome, although other sources were not ruled out. Most bacterial groups experienced a cyclical pattern of litter contamination seen in other studies, whereas microbial stabilization required approximately four flocks. 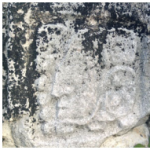 Microbial activity has an important impact on the maintenance of cultural heritage materials, owing to the key role of microorganisms in many deterioration processes. In order to minimize such deleterious effects, there is a need to fine-tune methods that detect and characterize microorganisms. Trends in microbiology indicate that this need can be met by incorporating modern techniques. All of the methods considered in this review paper are employed in the identification, surveillance, and control of microorganisms, and they have two points in common: They are currently used in microbial ecology (only literature from 2009 to 2015 is included), and they are often applied in the cultural heritage sector. More than 75 peer-reviewed journal articles addressing three different approaches were considered: molecular, sensory and morphological, and biocontrol methods. (…) 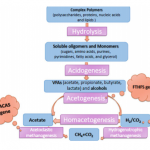 As a result of developments in molecular technologies and the use of sequencing technologies, the analyses of the anaerobic microbial community in biological treatment process has become increasingly prevalent. This review examines the ways in which microbial sequencing methods can be applied to achieve an extensive understanding of the phylogenetic and functional characteristics of microbial assemblages in anaerobic reactor if the substrate is contaminated by antibiotics which is one of the most important toxic compounds. (…)

Review: Does bioleaching represent a biotechnological strategy for remediation of contaminated sediments? – Viviana Fonti – Science of The Total Environment ($41.95) 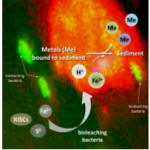 Bioleaching is a consolidated biotechnology in the mining industry and in bio-hydrometallurgy, where microorganisms mediate the solubilisation of metals and semi-metals from mineral ores and concentrates. (…) Here we review the application of bioleaching for sediment bioremediation, and provide a critical view of the main factors that affect its performance. We also discuss future research needs to improve bioleaching strategies for contaminated aquatic sediments, in view of large-scale applications.