Abstract
Urban green space provides health benefits for city dwellers, and new evidence suggests that microorganisms associated with soil and vegetation could play a role. While airborne microorganisms are ubiquitous in urban areas, the influence of nearby vegetation on airborne microbial communities remains poorly understood. We examined airborne microbial communities in parks and parking lots in Eugene, Oregon, using high-throughput sequencing of the bacterial 16S rRNA gene on the Illumina MiSeq platform to identify bacterial taxa, and GIS to measure vegetation cover in buffer zones of different diameters. Our goal was to explore variation among highly vegetated (parks) versus non-vegetated (parking lots) urban environments. A secondary objective was to evaluate passive versus active collection methods for outdoor airborne microbial sampling. Airborne bacterial communities from five parks were different from those of five parking lots (p = 0.023), although alpha diversity was similar. Direct gradient analysis showed that the proportion of vegetated area within a 50 m radius of the sampling station explained 15% of the variation in bacterial community composition. A number of key taxa, including several Acidobacteriaceae were substantially more abundant in parks, while parking lots had higher relative abundance of Acetobacteraceae. Parks had greater beta diversity than parking lots, i.e. individual parks were characterized by unique bacterial signatures, whereas parking lot communities tended to be similar to each other. Although parks and parking lots were selected to form pairs of nearby sites, spatial proximity did not appear to affect compositional similarity. Our results also showed that passive and active collection methods gave comparable results, indicating the “settling dish” method is effective for outdoor airborne sampling. This work sets a foundation for understanding how urban vegetation may impact microbial communities, with potential implications for designing neighborhoods and open space systems that foster better human health. 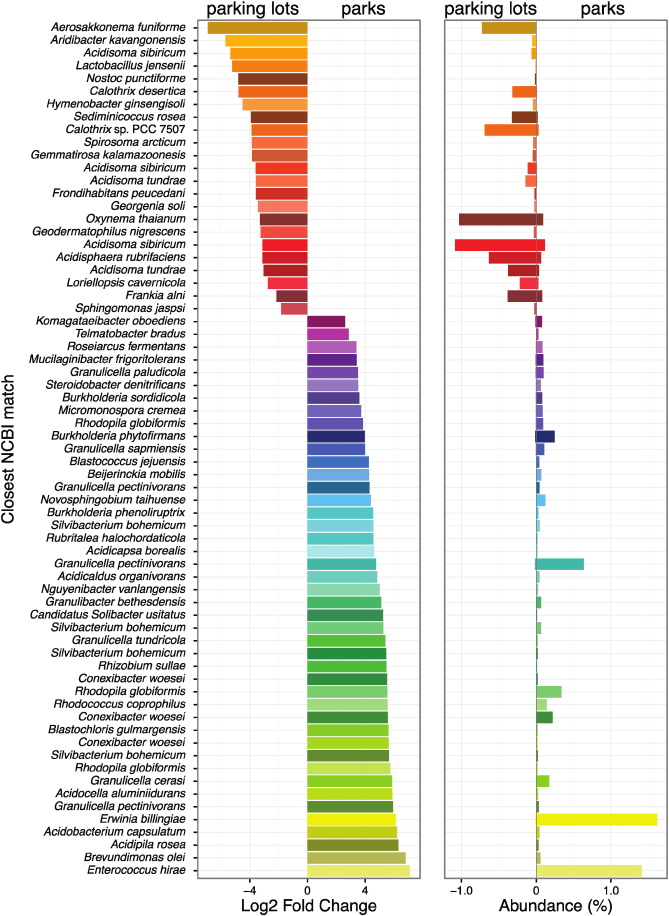 Disclosure: I am a consultant for Phylagen, Inc. a company in which two of the authors of this paper are involved.