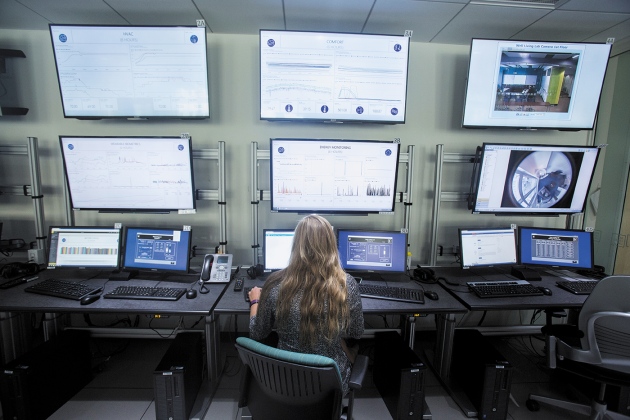 Windows, desks and employees are being wired up in a quest to create healthy, evidence-based environments.

It focuses on a collaboration between the Mayo Clinic and a design firm – Delos to create something called the “Well Living Lab”.  Basically it is a high tech facility to study the interaction between people and the built environment.  And it even has some microbial work going on or that will be happening:

The complexity will also grow as the team begins to layer studies on top of one another. Nicholas Clements, a director at Delos Labs, is collecting samples of the office microbiome: bacteria, fungi and more that live in the office’s nooks and crannies, and on the surfaces that people touch every day. Scientists think that it may be possible to actively shape the indoor microbiome to improve human health, but research into this idea is in its infancy.

“We’d like to push that science further and hopefully we can accomplish that here,” says Clements, who plans to test whether certain environmental interventions, such as changing flooring and surface materials or installing a ‘green wall’ of living plants, can alter the office’s microbes–or the health of its human occupants. (He will also track participants’ exposure to indoor air pollutants, such as the volatile organic compounds emitted by paint and furniture.)

Now, I wish the article and/or some of the people interviewer placed more of this in context of the rich and growing body of literature of the human-built environment interaction (e.g., this facility seems really fancy and nice and all but I wish the article had spent a bit more time on other facilities that are being used in the same or similar ways some of which were mentioned briefly).

Anyway – the concept is worth considering and some of the aspects of this facility are quite interesting.  Overall, I think the article is worth checking out.  We need more and more efforts like this (well, maybe not at this cost) to start to get a better handle on the complexities of built environment – human interactions (and of course, on the microbiome aspects of such interactions).