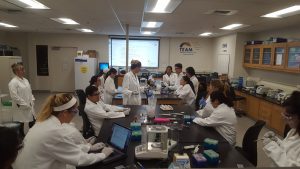 So last quarter we wrapped up the third in our series of “Swabs to Genomes” based courses at UC Davis.  As with every iteration there was the plan and there was the reality.  More on that below.

The first version of class this was Swabs to Genomes in abalone which while scientifically awesome, was both expensive and a prohibitive amount of work for the instructors.  The next version was on the koala microbiome where we attempted to do less and have the students learn more.  This most recent iteration, focused on the nectar microbiome was the extreme version of “less is more”.   The students learned a great deal but we accomplished far less scientifically.  It may be that there’s an intrinsic tradeoff between those goals in this kind of setting.

This course was inspired by a collaboration with Rachel Vannette and Lisa Tell here at UC Davis who are studying various aspects of plant-pollinator-microbe interactions, particularly focused on bees and hummingbirds.  The goal for this course was to identify a large number (~100) of bacterial isolates collected from plant nectar of a few different plants.  After identification the students were going to assay the strains for pH tolerance and osmotolerance and relate those findings back to the metadata about the nectar. 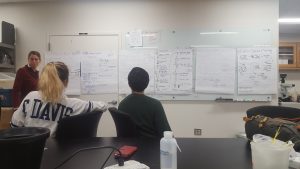 What actually happened was that we had some major technical problems and only got through a single round of identifications (~40) and then didn’t get to any of the physiology testing.  However, the students are much more comfortable doing PCR and gels than they would have been just doing them a single time.  :)  Ashley Vater, who is the person who really runs these classes, really focused on having the students understand what they were doing and not just go through the motions.  The quarter was full of great learning opportunities… for example the protocols we used were written by the students themselves after extensive research and feedback, instead of just being handed to them.

Once we hit the snags we decided to make this a two-quarter class… so in the Spring we’ll be taking the identified isolates and doing some more in-depth tests on those isolates and hoping to relate that information back to the various hypotheses about plant-pollinator-microbe interactions.  The most exciting of these, IMHO, is the idea that the nectar is selecting for particular microbes that are then releasing volatiles that attract certain pollinators (e.g. this paper from the Vannette lab).  So stay tuned for that in the Spring!  To reduce the probability of snags, we’re going to have two undergraduates in the lab spent Winter quarter optimizing the assays.

As always, all of the course materials are available online… from the Google Docs to the protocols to the data.  In addition the students were offered a choice during the class between editing a Wikipedia article, learning to use Twitter, or writing a blog post here on microBEnet… all of which were very successful activities.