Skin-associated bacteria are abundant indoors. A comparison across studies shows that up to 30% of bacterial sequences detected indoors are associated with the human body (see Table 1 in this 2016 paper). I’ve been kind of skeptical that these sequences represented live organisms, however. Rather, I suspected the high proportion of sequences that were human-associated were more detritus than diverse ecosystem. I couldn’t find any research on how long skin-associated microbes remain viable once shed – but am happy to be directed if others know of any. With this question in mind, Jocelyn Simlick, an undergraduate researcher interested in antibiotic resistance, and I decided to look into it.

Here was the general workflow. To approximate shedding skin cells, we used medical tape to get skin cells off 10 volunteers (with IRB approval). We then stored the tape in sterile condition for up to 10 weeks, periodically placing the tape on culture media to see if/what would grow. 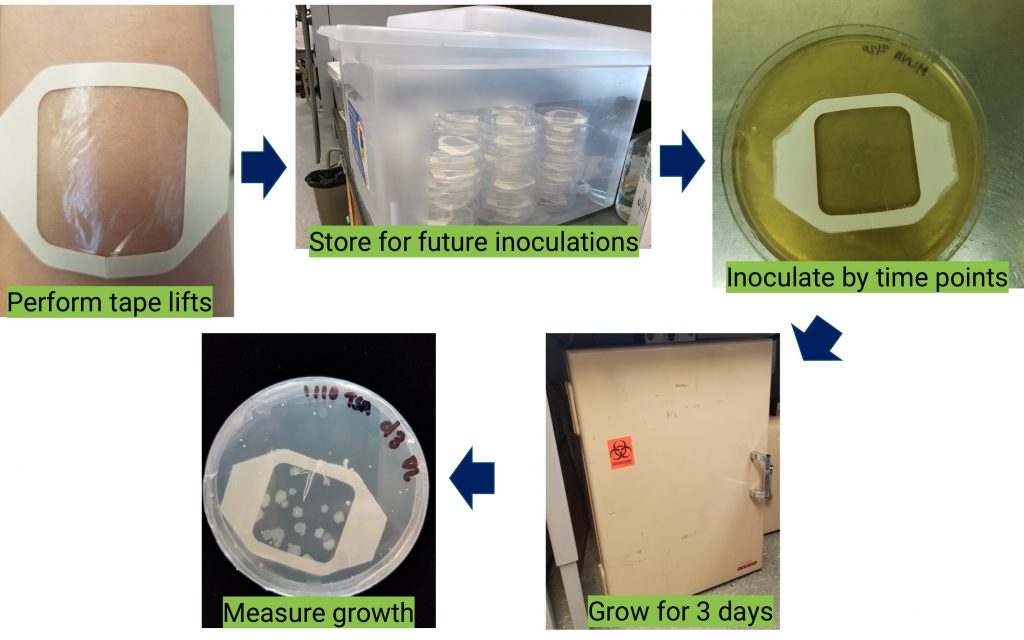 To my surprise, we observed growth for the duration that the experiment ran – 10 weeks. The study had a limited scope, so we cannot draw too many conclusions. But we can say that for some people, their skin-associated bacteria remain culturable for many weeks after the skin cells have shed. One volunteer’s bacteria were still covering half a culture plate a good 10 weeks after shedding.

Obviously this hint of data raises a lot of questions, but I’m not more worried about built-environment associated bacteria than I was before. Instead, I think there’s a lot more work to do around the stability of microbes (particularly viruses) on surfaces and how the matrix in which they were deposited may affect their persistence.

One thought on “Staying alive in the built environment”