There was a recent flash in the news about the ‘5-second rule’ when a group of microbiologists at Aston University in the UK released results from a study (that, from what I can tell, is unpublished). The summary reads, “The study…monitored the transfer of the common bacteria Escherichia coli (E. coli) and Staphylococcus aureus from a variety of indoor floor types (carpet, laminate and tiled surfaces) to toast, pasta, biscuit and a sticky sweet when contact was made from 3 to 30 seconds.”

The results showed that both time and type of flooring impacted the amount of these tracer bacteria on the food.  There were more bacteria with longer time on the floor, and with hard surfaces than with carpet. These results are in-line with a previous study that tested the transfer of Salmonella from surfaces to food (if you are willing to call bologna food).

In collaborating with others to investigate the microbiology of the built environment, I’ve come to learn that environmental engineers think a lot about the transport of particles — of which microbes are a part — and often with ingenious devices. 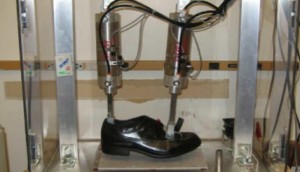 Recently, Sippola and colleagues in the Indoor Environment Department at Lawrence Berkeley National Labs published results measuring the “uptake and downlay mass transfer efficiencies of particles between shoes and floors in a step-simulation chamber.” They mainly focused on the issue of tracking particles around a building, and they showed that that the uptake of particles from the floor to the shoe tended to be higher on tile than on carpet — just like the studies that looked at the transfer of bacteria. In this case at least, bacteria cells follow the laws of physics.

From the perspective of airborne particles in the built environment, though, transfer to another surface is different from resuspension — and the impact of flooring type is opposite. The aerosolization of microbes from flooring as a result of walking is a process that can greatly influence indoor air particle concentration (and by extension, the indoor air microbial composition, my colleagues and I hypothesize). When it comes to resuspension, rates are higher on carpet than hard flooring. Unsurprisingly, there also tends to be a higher “particle load” on carpet than hard flooring, thus compounding the effect of higher resuspension rates — and supporting the recommendation that people with allergies should choose hard floorings in order to minimize exposure to allergens in dust. 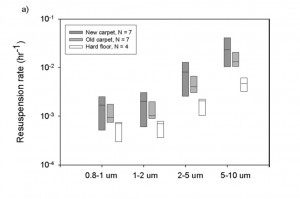 The contrasting outcomes — that bacteria on a carpet are less likely to get on your bologna but more likely to become airborne when your walk in the room — were confusing until I was able to separate these two processes of transfer and resuspension in my mind. I’m learning that in order to characterize the microbes indoors, you may not just have to consider the strength of the sources but also the processes that control their dynamics, i.e. their “dispersal” in ecological language.

[Credit to my colleague Seema Bhangar for being the environmental engineer that helps me make sense of engineering concepts and papers.]

One thought on “Transfer and resuspension — its not all bologna”