The authors of the study profiled 93 bacterial strains isolated from the Patancheru Environment Technology Limited (PETL) wastewater treatment plant in India, which receives water effluent from 90 bulk drug manufacturers.  The treated effluent contains alarmingly high levels (up to 30mg/L) of antibiotics such as norfloxacin and ciprofloxacin, among others.  A whopping 86% of bacterial strains were resistant to 20 or more antibiotics, as Figure 1 from the paper illustrates: 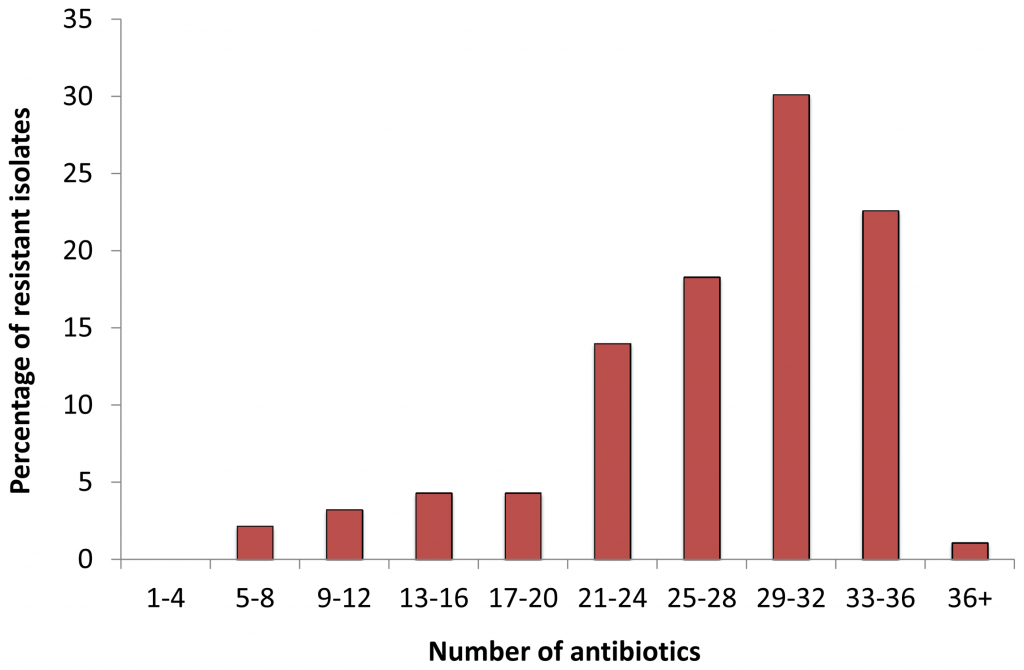 Additionally, class 1 and 2 integrons (genetic elements that promote horizontal gene transfer) were detected in 80% and 95% of bacterial strains, respectively.  qPCR confirmed an unprecedented high level of integrons among the strains isolated from the treatment plant.  These results are particularly troubling, especially considering another study, which has shown that river sediment contaminated by effluent from this same wastewater treatment plant harbored bacteria with resistance genes to several classes of antibiotics.

Like other studies that have extrapolated and inferred the spread of antibiotic resistance in wastewater communities, the results of this study will be refined and confirmed by detecting and demonstrating active horizontal gene transfer between bacterial members of the resident sludge microbial community.  Nevertheless, the amount of antibiotic resistance and the level of the potential for horizontal gene transfer in the PETL wastewater treatment plant are sobering realities that must not be ignored.