Happy Holidays!  As I already noted on my MicrobiomeDigest blog, the stream of scientific papers does not seem to take a holiday break, so I will keep on posting new papers here. 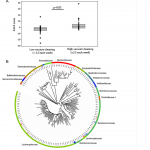 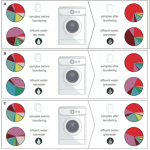 Comment EB: As commented by Alec Henderson on Twitter, it would be cool to look at shared washing machines in apartment complexes, to see if they introduce other people’s bacteria between laundry cycles. Also, here is another recent paper on microbes in washing machines by Nix et al: Characterization of Microbial Communities in Household Washing Machines 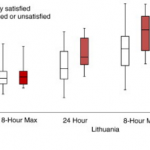 Sixteen existing multi-family buildings (94 apartments) in Finland and 20 (96 apartments) in Lithuania were investigated prior to their renovation in order to develop and test out a common protocol for the indoor environmental quality (IEQ) assessment, and to assess the potential for improving IEQ along with energy efficiency. Baseline data on buildings, as well as data on temperature (T), relative humidity (RH), carbon dioxide (CO2), carbon monoxide (CO), particulate matter (PM), nitrogen dioxide (NO2), formaldehyde, volatile organic compounds (VOCs), radon, and microbial content in settled dust were collected from each apartment. (…) The results indicated that most measured IEQ parameters were within recommended limits. (…) In this paper, we present some evidence for the potential in improving IEQ along with energy efficiency in the current building stock, followed by discussion of possible IEQ indicators and development of the assessment protocol.

Comment EB: Not much microbiology here, just a fungal qPCR on dust, and the sentence: “The two countries differed considerably in total fungal levels as detected with qPCR from settled dust.” 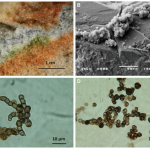 Dehydrated Antarctic cryptoendolithic communities and colonies of the rock inhabitant black fungi Cryomyces antarcticus (CCFEE 515) and Cryomyces minteri (CCFEE 5187) were exposed as part of the Lichens and Fungi Experiment (LIFE) for 18 months in the European Space Agency’s EXPOSE-E facility to simulated martian conditions aboard the International Space Station (ISS). (…) Although less than 10% of the samples exposed to simulated martian conditions were able to proliferate and form colonies, the PMA assay indicated that more than 60% of the cells and rock communities had remained intact after the “Mars exposure.” Furthermore, a high stability of the DNA in the cells was demonstrated. The results contribute to assessing the stability of resistant microorganisms and biosignatures on the surface of Mars, data that are valuable information for further search-for-life experiments on Mars.

Analysis of the incidence fungi in a crypt cemetery – Cecylia Åukaszuk – Journal of the Air & Waste Management Association ($$, no access from Stanford University) 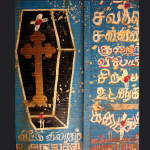 The aim of this study was to analyze the incidence of fungi in the chapel crypt.(…) The lowest numbers of fungal colonies were isolated at the entrance to the cemetery (2400 CFU/m3). (…). The highest of fungal colonies from air samples at baseline were isolated inside the crypt when coffin was opened (4820 CFU/m3). (…) Assessment of fungi in the air samples and different surfaces of the crypt revealed high levels of molds in the air samples. Fungal numbers within the crypt exceed recommended limits for occupational exposure. Employees working in the crypts should know about these hazards.

Comment EB: I was intrigued by the “when coffin was opened” part and would have loved to see the PDF, but alas, Stanford did not allow me access. Photo from Flickr under Creative Commons by Meena Kadri. 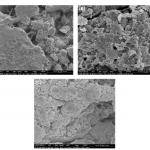 Microbially influenced corrosion (MIC) in concrete results in significant cost for infrastructure maintenance. Prior studies have employed molecular techniques to identify microbial community species in corroded concrete, but failed to explore bacterial activity and functionality during deterioration. In this study, biofilms of different sulfur-oxidizing bacteria compositions were developed on the surface of cement paste samples to simulate the natural ecological succession of microbial communities during MIC processes. (…) Samples with five species biofilm had the highest hydrogen ion and calcium ion transport rates, confirming attribution of acidophilic sulfur-oxidizing microorganisms (ASOM). Differences in transport rates between three species samples and two species samples confirmed the diversity between Thiomonas intermedia and Starkeya novella. The limitations of SR sensors in corrosion application could be improved in future studies when combined with molecular techniques to identify the roles of major bacterial species in the deterioration process. 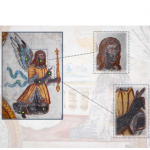 The biodeterioration/biodegradation process is an important issue for the conservation of cultural heritage that needs urgent answers to their rehabilitation. In this way, the role of microorganisms in surfaces alteration was exploited. This work revealed a strong relationship between the microbiological proliferation and the damaged areas, evidencing the important role of the microorganisms in mural paintings alteration process. The oxidation of lead-based pigments noticeably contributes to the pigments alteration, and seems to be correlated with the presence of biodeteriorative microorganisms. The study of the mechanisms underlying the microbiological attack of mural paintings has been explored to understand as much as possible the proliferative ability and biodeteriorative capacity of the microorganisms, related to darkening on lead-based pigments.

Comment EB: this is a real cool study, where darkened areas from paintings were sampled and cultured. Bacterial and fungal isolates were identified by 16S / ITS sequencing. “the cultivable microorganisms thriving in the Santa Clara mural paintings are essentially filamentous fungi of the genera Aspergillus, Cladosporium and Penicillium.” Hopefully, culture-independent analysis will follow.