New papers on the intersection of human activities and microbes, selected from my daily MicrobiomeDigest blog. 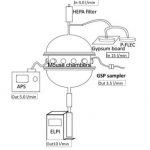 (…) The aim of this study was to develop an inhalation exposure system to be able to examine responses in mice exposed to mixed fungal species aerosolized from fungus-infested building materials. Indoor airborne fungi were sampled and cultivated on gypsum boards. Aerosols were characterized and compared with aerosols in homes. Aerosols containing 107 CFU of fungi/m3 air were generated repeatedly from fungus-infested gypsum boards in a mouse exposure chamber. (…) Through aerosolization of fungi from the indoor environment, cultured on gypsum boards, it was possible to generate realistic aerosols in terms of species composition, concentration, and particle sizes. The inhalation-exposure system can be used to study responses to indoor fungi associated with water damage and the importance of fungal species composition. 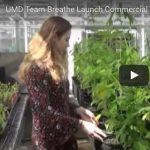 (…) The third option is biowalls, vertical structures covered in plants that can help filter toxins from indoor air. Biowalls can be split into 2 categories: active and passive systems (…) Team BREATHE aims to bridge the gap between these two models by designing an innovative system that brings the air filtration benefits of the active wall to the low-energy and low-maintenance qualities of the passive system. We also aim to investigate which plants host root bacterial communities that best filter out VOCs, so the final product will be a biowall system optimized with low energy, low maintenance, and high rates of VOC filtration. 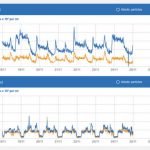 Today, microbial drinking water quality is monitored through either time-consuming laboratory methods or indirect on-line measurements. Results are thus either delayed or insufficient to support proactive action. A novel, optical, on-line bacteria sensor with a 10-minute time resolution has been developed. (…) The technology is capable of distinguishing and quantifying bacteria and particles in pure and mixed suspensions, and the quantification correlates with total bacterial counts. Several field applications have demonstrated that the technology can monitor changes in the concentration of bacteria, and is thus well suited for rapid detection of critical conditions such as pollution events in drinking water.

Review: The importance of sewer biofilms – Henriette Jensen – Water ($6 to rent, $38 to own) 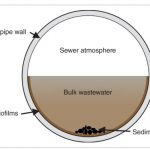 In spite of being under ground and out of sight, sewers are important parts of the urban infrastructure for transporting used, contaminated water for safe treatment. Within sewers, during the transport of waste water, processes take place, transforming the chemical components of the waste water. These processes are largely carried out by bacteria, a significant part of which live in biofilms. (…) However, improved understanding of the function of biofilms and the novel techniques and approaches for manipulating biofilms may provide us with strategies for controlling these problems. Moreover, such advances may allow us to design in-sewer biofilms for beneficial purposes such as in-pipe treatment of waste water, potentially leading to decreased environmental impact. 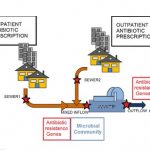 To test the hypothesis of a seasonal relationship of antibiotic prescriptions for outpatients and the abundance of antibiotic resistance genes (ARGs) in the wastewater, we investigated the distribution of prescriptions and different ARGs in the Dresden sewer system and wastewater treatment plant during a two-year sampling campaign. Based on quantitative PCR (qPCR), our results show a clear seasonal pattern for relative ARGs abundances. The higher ARGs levels in autumn and winter coincide with the higher rates of overall antibiotic prescriptions. (…) Our results demonstrate that in a medium-term study the combination of qPCR and next generation sequencing corroborated by drug-related health data is a suitable approach to characterize seasonal changes of ARGs in wastewater and treated wastewater. 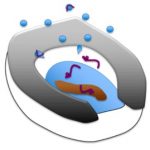 To gain insight into the potential for aerosolization of viruses in wastewater systems, we investigated the partitioning of MS2 and Phi6 bacteriophages in synthetic sludge and anaerobically digested sludge from a wastewater treatment plant. We evaluated partitioning among the liquid, solids, and material surfaces of porcelain, concrete, polyvinyl chloride (PVC), and polypropylene. In all cases, at least 94% of the virions partitioned into the liquid fraction. In real sludge, no more than 0.8% of virions partitioned to the solids and no more than 6% to the material surface. (…) 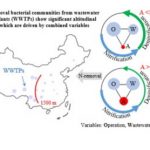 Microbial ecological information on the nitrogen removal processes in wastewater treatment plants (WWTPs) has been of considerable importance as a means for diagnosing the poor performance of nitrogen removal. In this study, the altitude-scale variations in the quantitative relationships and community structures of betaproteobacteria ammonia-oxidizing bacteria (Î²AOB) and nitrite-reducing bacteria containing the copper-containing nitrite reductase gene (nirK-NRB) and the cytochrome cd1-containing nitrite reductase gene (nirS-NRB) were investigated in 18 municipal WWTPs distributed along a 3660-masl altitude gradient in China. (…)  Compared with the stable proportions below 1500 masl, the proportions exhibited a pronounced decreasing trend with increased altitude above 1500 masl. (…)  In summary, although the variations of nitrogen-removal bacterial community in WWTPs were driven dominantly by wastewater and operational variables, altitude was also an important variable influencing the quantitative relationships and community structures of nitrogen-removal bacteria in WWTPs particularly above 1500 masl. 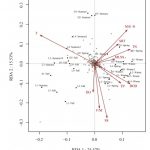 Microbial communities of activated sludge (AS) play a key role in the performance of wastewater treatment processes. However, seasonal variability of microbial population in varying AS-based processes has been poorly correlated with operation of full-scale wastewater treatment systems (WWTSs). In this paper, significant seasonal variability of AS microbial communities in eight WWTSs located in the city of Guangzhou were revealed in terms of 16S rRNA-based Miseq sequencing. Furthermore, variation redundancy analysis (RDA) demonstrated that the microbial community compositions closely correlated with WWTS operation parameters such as temperature, BOD, NH4+-N and TN. (…) 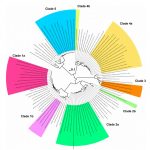 Unraveling the drivers controlling the response and adaptation of biological communities to environmental change, especially anthropogenic activities, is a central but poorly understood issue in ecology and evolution. Comparative genomics studies suggest that lateral gene transfer (LGT) is a major force driving microbial genome evolution, but its role in the evolution of microbial communities remains elusive. To delineate the importance of LGT in mediating the response of a groundwater microbial community to heavy metal contamination, representative Rhodanobacter reference genomes were sequenced and compared to shotgun metagenome sequences. (…) Collectively, our analyses indicated the importance of LGT during the evolution of groundwater microbial communities in response to heavy metal contamination, and a conceptual model was developed to display such adaptive evolutionary processes for explaining the extreme dominance of Rhodanobacter populations in the contaminated groundwater microbiome. 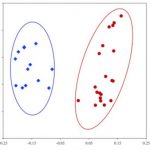 Arsenic (As) can cause serious hazards to human health, especially in mining areas. (…) In this study, 33 pairs of soil and grain samples were collected from the corn and paddy fields around an arsenic mining area in Shimen County in Hunan Province, China. Significant differences were found between the soil nitrogen, As concentrations, and bacteria activities among these two types of land use. According to the structural equation model (SEM) analysis, compared with other environmental factors, soil As was not the key factor affecting the bacterial community, even when grain As was beyond the threshold of the national food hygiene standards of China. In the corn field, soil pH was the main factor dominating the bacterial richness, composition and grain As. (…) 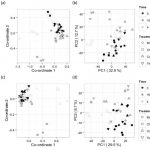 The use of soil fumigation products to manage soilborne pathogens raises the question of whether it has undesirable effects on the soil ecosystem. Therefore, the aim of this study was to investigate the impacts of alternative fumigation products on soil microbial population structure. We characterised soil bacterial and fungal communities in response to the soil treatment with microencapsulated terpene, Brassica seedmeal (BioFenceâ„¢) and chloropicrin in a field trial. (…) Chloropicrin dramatically altered both bacterial and fungal populations within four weeks of application. The effect on bacterial population structure is short-lived and became non-significant 16 weeks after treatment; however, fungal population structure was more persistently affected by chloropicrin. Neither terpene nor BioFenceâ„¢ significantly affected soil microbiota. (…)

Biomineralization of atrazine and analysis of 16S rRNA and catabolic genes of atrazine degraders in a former pesticide mixing site and a machinery washing area – James F. Douglass – Journal of Soils and Sediments ($39.95) 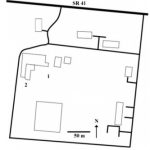 The purpose of this study was to determine the first-order rate constants and half-lives of aerobic and anaerobic biomineralization of atrazine in soil samples from an agricultural farm site that had been previously used for mixing pesticide formulations and washing application equipment. Atrazine catabolic genes and atrazine-degrading bacteria in the soil samples were analyzed by molecular methods. (…) The soils contained active atrazine-metabolizing microbial communities. The anaerobic biometer data showed variable response of atrazine biomineralization to external electron acceptor conditions. Partial pathways are inevitable in soil microbial communities, with metabolites linking into other catabolic and assimilative pathways of carbon and nitrogen. There was no evidence for the complete set of functional genes of the known pathways of atrazine biomineralization among the isolates. 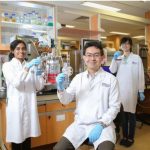 A single-celled organism could end the use of harmful chemicals to extract precious metals from electronic waste (e-waste). Scientists from the National University of Singapore (NUS) have re-engineered the Chromobacterium violaceum bacterium to give it the ability to create enzymes that can recycle metals such as gold, platinum and palladium from e-waste. This means barrels of poisonous chemicals such as cyanide or concentrated acids – now often used to dissolve metals in e-waste before they are recovered through electrolysis – could one day be replaced with pools of this common soil bacterium. 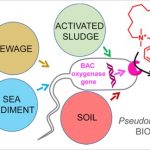 Benzalkonium chlorides (BACs) are emerging pollutants. Identification of microorganisms and the genes involved in the biodegradation of BACs is crucial for better understanding the fate of BACs in the environment and developing treatment strategies. Four microbial communities degrading BACs were developed from sewage (SEW), activated sludge (AS), soil (SOIL) and sea sediment (SEA) samples. According to 16S rRNA pyrosequencing and shotgun metagenome sequencing analyses, the most abundant species represented uncharacterized members of the Pseudomonas and Achromobacter genera. (…) Genomes of four BAC degrading and nondegrading BIOMIG1 phenotypes were sequenced and differentially compared with each other. (…)