Skip to content
home .Featured, Bioinformatics, Methods and Tools, Research, Sequencing Are these microbes the “same”?

The most common metric of comparing sequenced microbial genomes is average nucleotide identity (ANI)1. The basic idea is to align two genomes and count the number of mismatches in the alignment. Genomes with an ANI of 99% have 1 mismatch between them every hundred bases, whereas genomes with an ANI of 95% have five mismatches between them every one hundred bases, and so on. There are numerous methods to calculate average nucleotide identity, with the major difference being the algorithm used to align the genomes.2–4

Through calculating the ANI between genomes in a number of systems, some loose and general ANI breakpoints have been documented:

At which ANI threshold it becomes appropriate to call genomes the “same” depends on the research question. If the question is whether the microbes in an office in Flagstaff are the same as those in an office in San Diego, two microbes of the same species should probably be considered the “same,” and thus an ANI of 95% (or 16S sequencing) would adequately address the question (and it did; Chase, 20169). If the question is whether microbes in two different body sites came from the same source, 95% ANI is too low. Just because E. coli is on two body sites doesn’t mean they came from the same place; one strain could have come from the soil and the other strain from the neighbor next door. An ANI above 95% is definitely needed to show both strains come from the same source, but how high of an ANI is needed is another question (99.9% ANI was used to address this in a recent publication; Olm, 201610).

When picking an ANI threshold for a specific question it is often helpful to visualize the relationship between the genomes. dRep, a python program recently published on bioRxiv11, was written to do just that. For example: 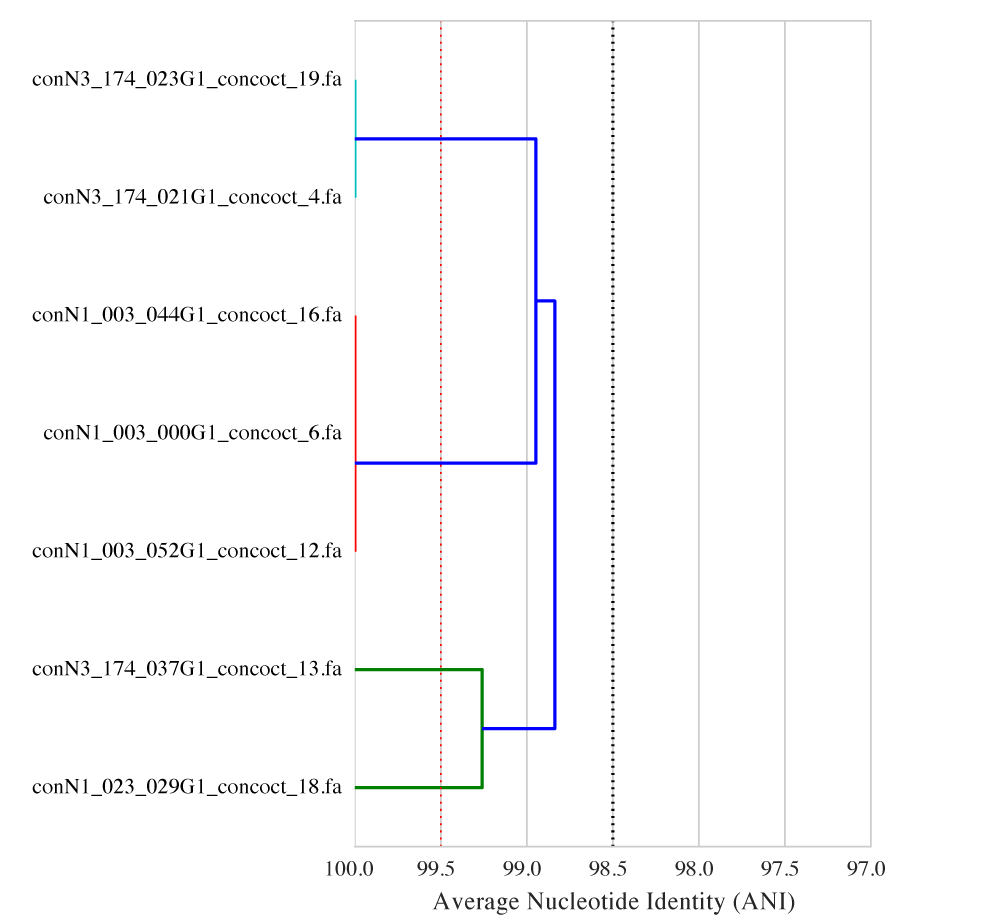 dRep, the program used to compute the ANI and generate the above figure, was recently published on bioRxiv.11 Documentation is available on ReadTheDocs, and the source code is available on GitHub. dRep cannot tell you which ANI threshold is appropriate for your specific application, but it can produce figures like the one shown above to help guide the decision.

One thought on “Are these microbes the “same”?”